I loved our first week in North Wales but we mainly visited the bigger seaside towns and more populated areas. For our second week, we left Colwyn Bay and headed down to the Llyn Peninsula to explore the Area of Outstanding Natural Beauty which is relatively unspoilt with a laid-back feel.


We based ourself at Aberafon campsite for a week and it was an ideal location to explore the coast and Snowdonia. This campsite is all about the views; it's nestled between the beach and the mountains around 10 miles away from Caernarfon.

Be warned that if you are staying at Aberafon the access road is very steep and narrow, ideal for campervans and campers but a little tricky to navigate for caravanners like myself and Martyn. There is a field right next to the beach where you can pitch up, but there are lovely views wherever you are situated on the site. Facilities at this site are very basic with only 6 showers for the whole site but the location makes up for this and we really enjoyed our time here. I really did feel switched off from the outside world and would love to return. 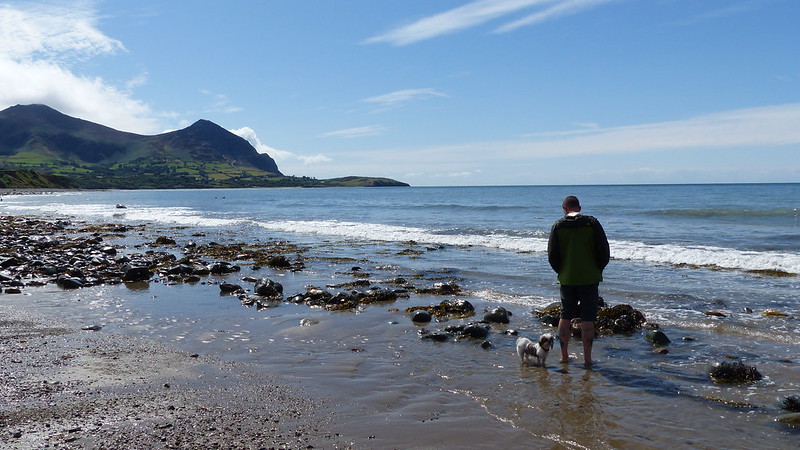 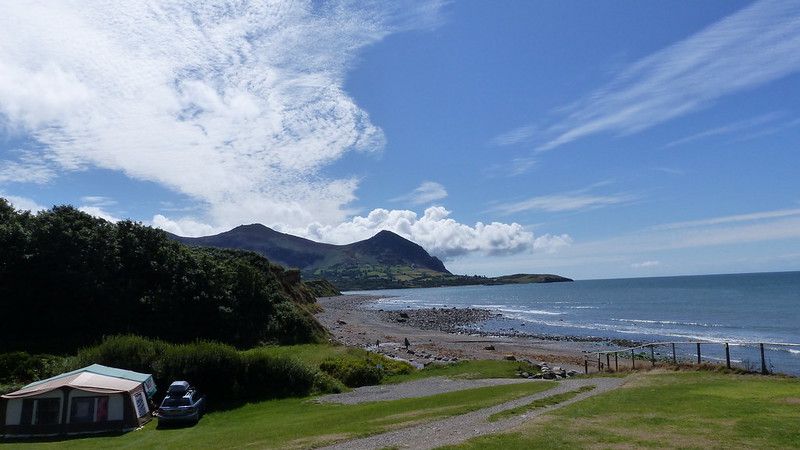 Wales has more Blue Flag beaches per mile than anywhere else in the UK and our favourite that we encountered on our trip was the one at Barmouth. Barmouth lies between a mountain range and the sea on the mouth of the river Mawddach. We loved visiting this town so much that we returned for a second time.

There's plenty to explore with a pretty harbour, the spectacular Barmouth Bridge and the old town. The very impressive bridge is a Grade II listed single-track wooden railway viaduct across the River Mawddach. It is the longest timber viaduct in Wales and one of the oldest still in regular use in Britain. We spent our days there walking Coco along the beach and scoffing fish and chips from the Mermaid Fish Bar which I highly recommend. 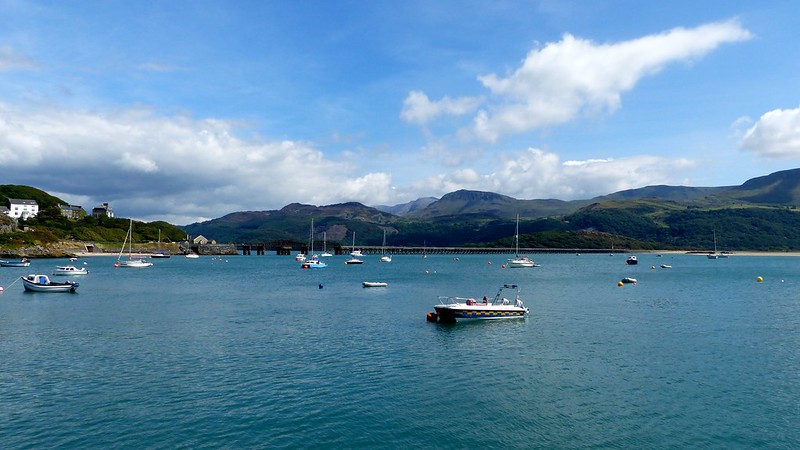 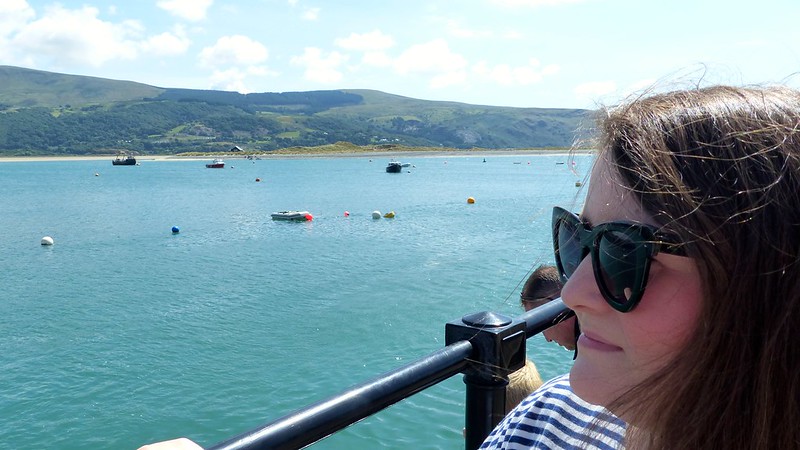 I've mentioned previously that both myself and my husband work in the railway industry. (You can read all my train related posts here) It was pretty inevitable that we would visit some of the heritage railways in operation in the north because there are so many to choose from.

The original railway closed in 1936 but has been completely rebuilt and restored by volunteers. Originally the railway carried thousands of tons of slate but tourists have now replaced this precious cargo. The railway starts in Caernarfon but we joined it in Porthmadog Harbour Station where the Welsh Highland Railway and the Ffestiniog Railway depart from.

The Welsh Highland Railway is a great way to see the awe-inspiring scenery of the Snowdonia National Park. You can relax in one of the first class Pullman carriages or sit in one of the open ones like we did so Coco could pop his head out and feel the wind in his fur. 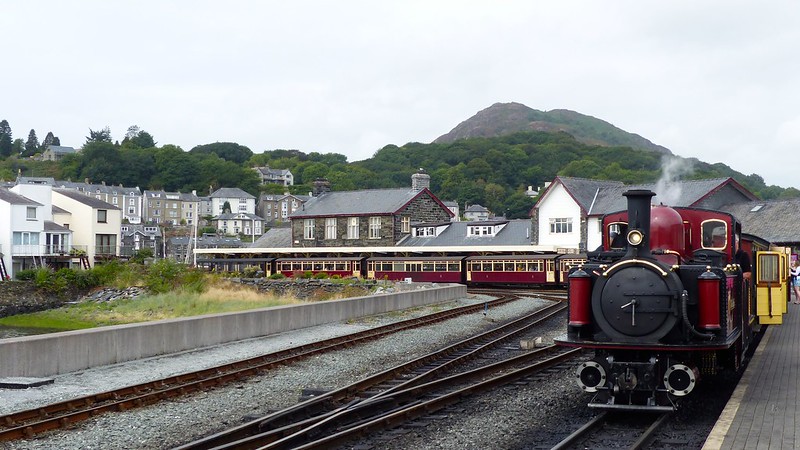 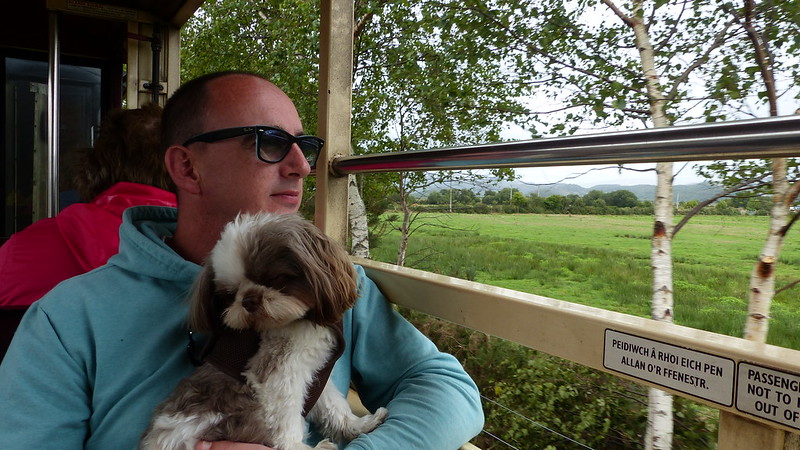 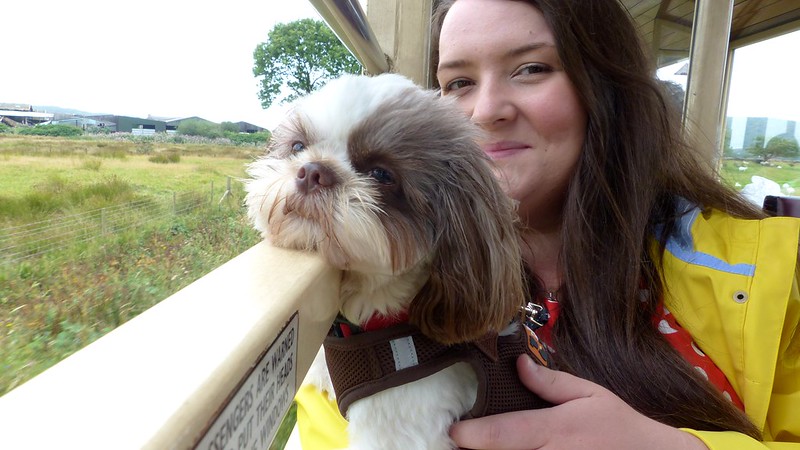 I was so pleased to have packed my lovely yellow rain coat from Lighthouse because the day we decided to visit the Ffestiniog Railway it rained continuously all day. I couldn't get any photos that day so you'll have to take my word for it - it was stunning and featured an impressive waterfall. 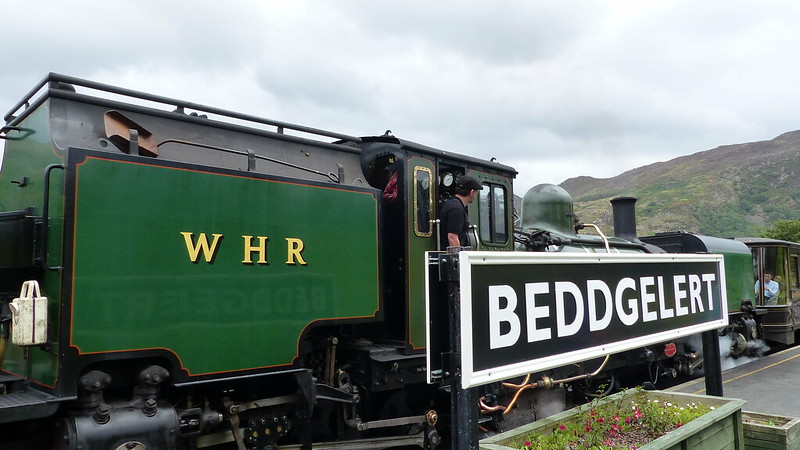 Beddgelert is a charming little town surrounded by mountains and is a base for many walking around Snowdonia.  The town was beautifully festooned in flowers and is a great spot to stop off along the railway for a picnic. Beddgelert (Meaning the grave of Gelert) is known for the sad tale of Prince Llewelyn ap Iorwerth and his faithful dog. You can read more about Gelert here. 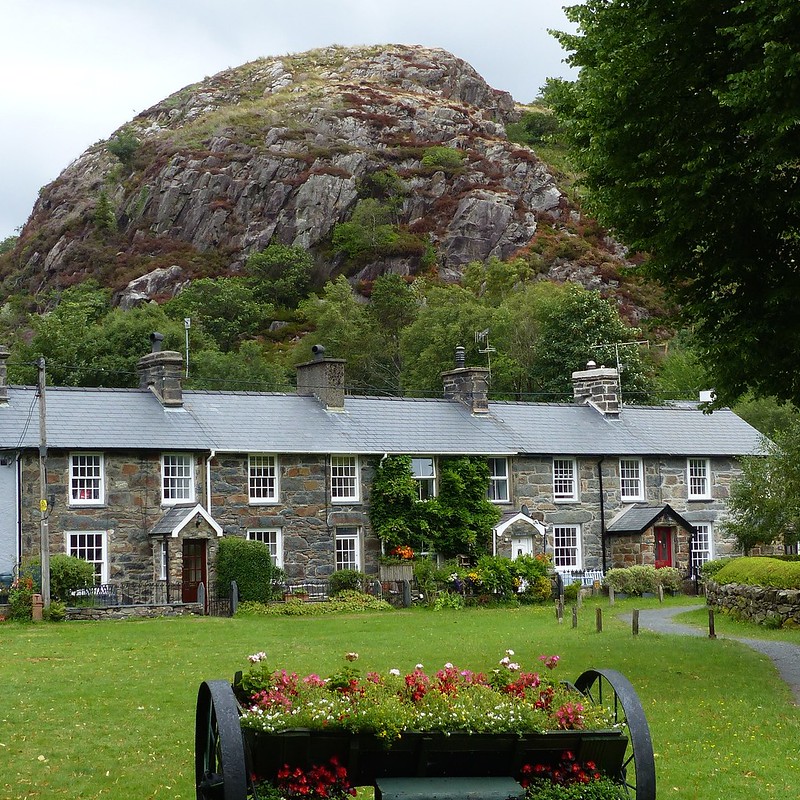 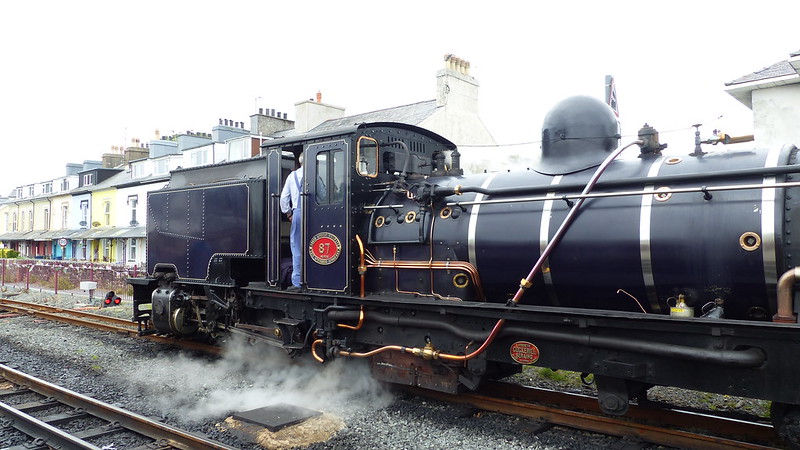 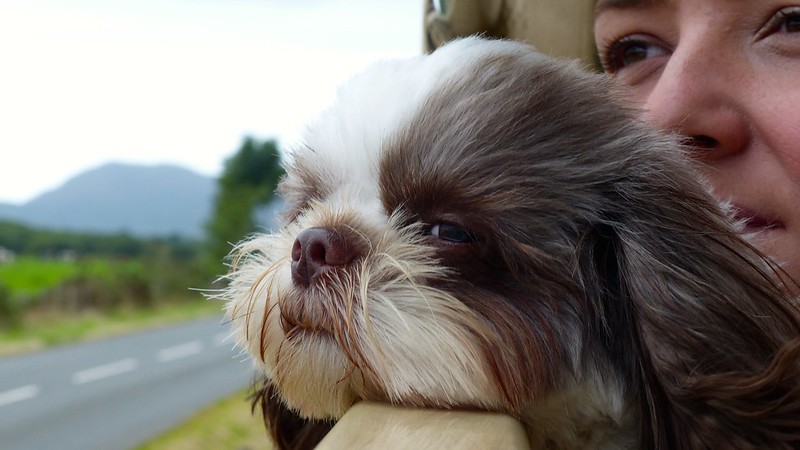 The main reasons we wanted to visit Llanberis was for the views and to take a trip on the Snowdon Mountain railway. However, dogs are not permitted to travel on this railway (boo hoo!) so we took some time to wander around and get fish and chips (again). Definitely a destination I would love to visit again as many of the local points of interest and attractions were closed by the time we arrived. 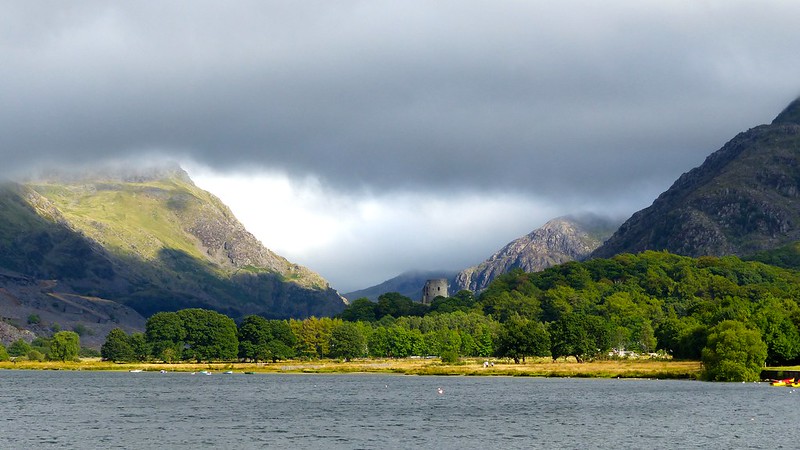 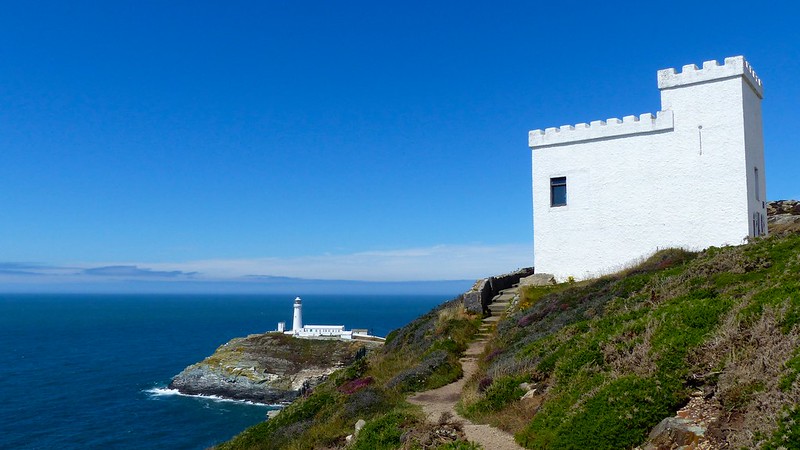 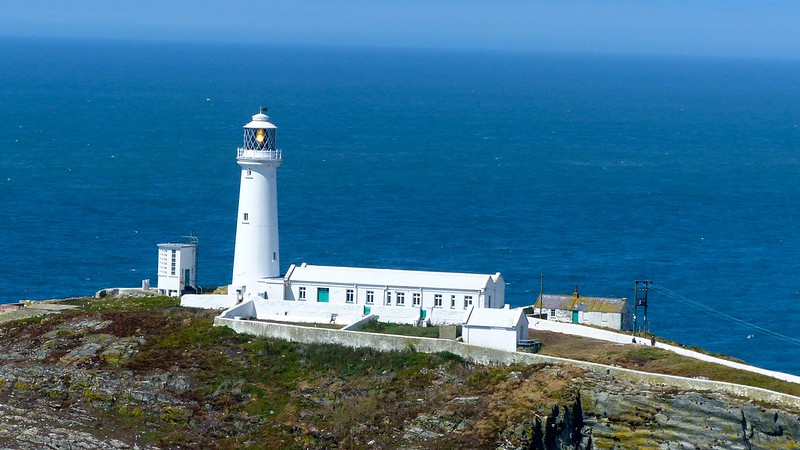 We really didn't think we would be lucky enough to see the South Stack lighthouse. Once we had reached Holyhead the whole island seemed to be covered in a thick, grey fog. We parked up near the South Stack Cliffs RSPB Centre and thought we would have a look around there but as we descended the steps to the lighthouse the fog lifted and we were treated to clear views of the lighthouse and coast.

For a sheltered view on a rainy day, head to Twr Ellin which is equipped with binoculars, telescopes and a screen with a live feed from cameras out on the cliffs. The perfect place to spot some of the guillemots, puffins and razorbills the area is known for! 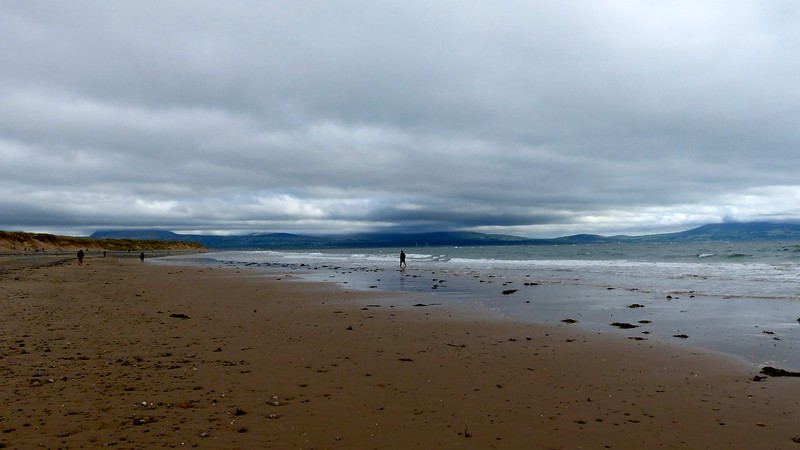 Newborough (also known as Llanddwyn) – is a large sandy beach with views of mountains and is surrounded by a pine forest with red squirrels and sand dunes, both of which are perfect for exploring. If you're travelling without a dog you can walk over to Ynys Landdwyn.

There is plenty to see over on the island including a lighthouse and an ancient churn dedicated to Saint Dwynwen. Saint Dwynwen is the patron saint of lovers of Wales and she established a religious enclosure on the island in the 5th century and the ruins can still be seen today. 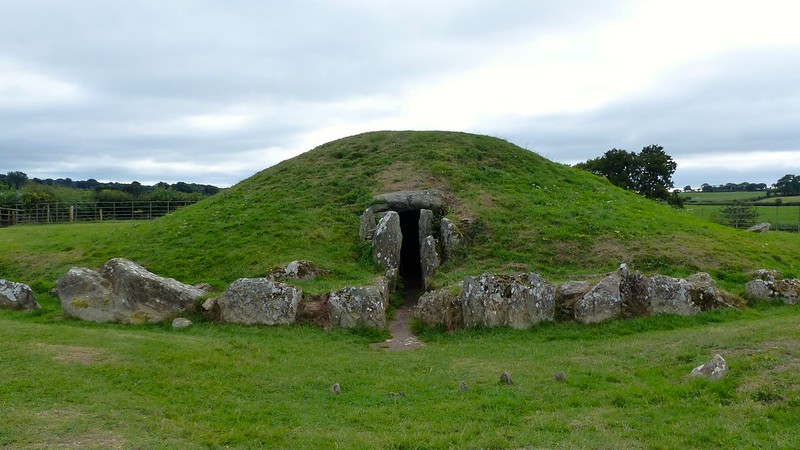 The last stop on our Anglesey tour was Bryn Celli Ddu. It's a Neolithic chambered tomb excavated in the 20s and was constructed to pay respect to the dead.

The monument is believed to have first been a ‘henge’ or enclosure and was later made into a tomb or chamber. Human bones both burnt and unburnt have been found here along with a decorated stone. Amazingly the tomb is aligned to coincide with the rising sun on the longest day of the year. At dawn on the midsummer solstice, rays light from the rising sun light up the chamber.

We spent our last evening at Morfa Nefyn and the nearby fishing hamlet of Porthdinllaen. We enjoyed a pint at the Ty Coch, which was voted one of the top ten beach bars in the world. Only locals have vehicle access to Ty Coch so visitors must walk across the golf course on top of the headland to reach the pub. This area is really popular with water sports enthusiasts and is a great place to relax with a pint whilst looking out over the Irish Sea. 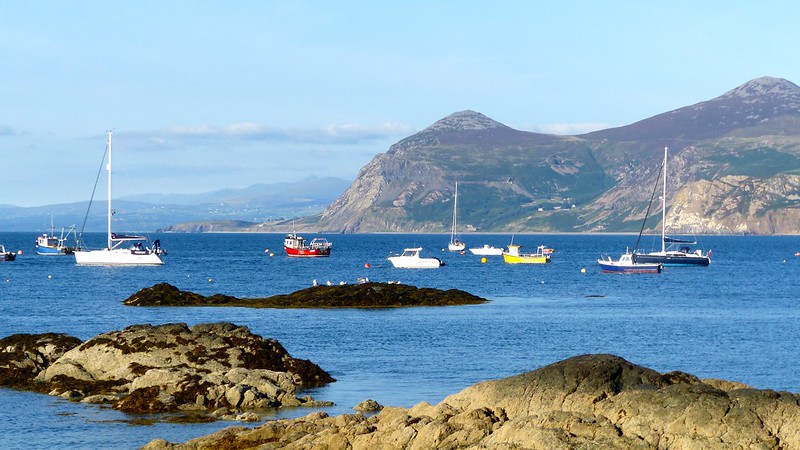 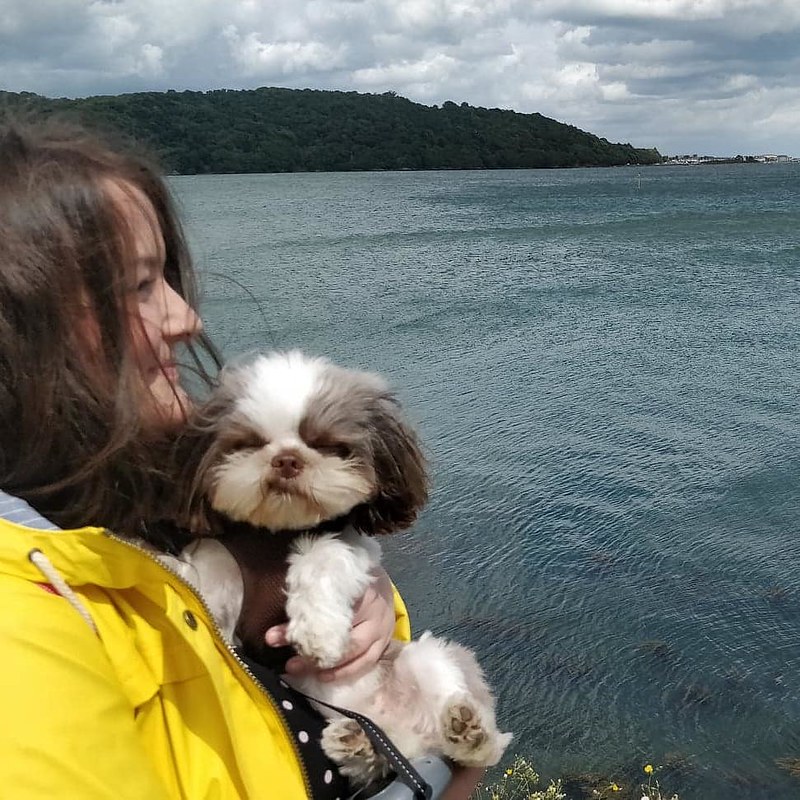 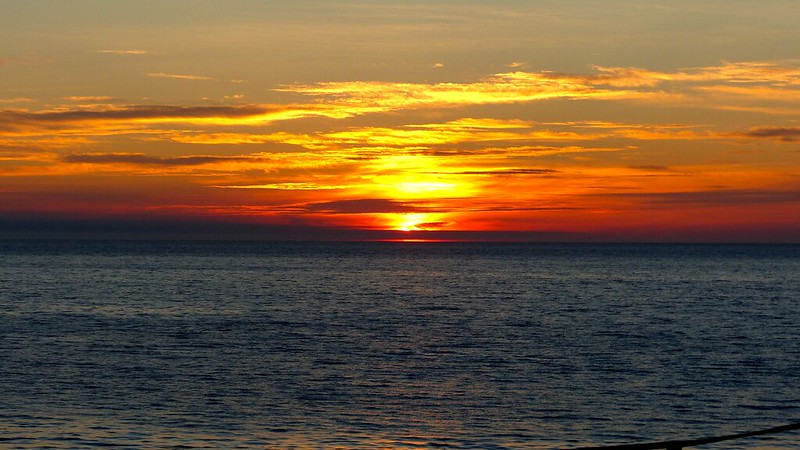 We had the most wonderful time in North Wales and even though we spent two weeks exploring the area there is so much we didn't have time to see and do. I know we will both definitely be returning here in the future. Criccieth, Abersoch and Pwllheli are all on the 'to visit' list for our next trip to North Wales.

We are missing exploring the UK in the caravan so we are looking to book a weekend break in September for our first anniversary in Shrewsbury before we pack everything away for the winter. Even if you aren’t celebrating an anniversary or planning a family camping trip, I encourage you to find a cheap singles holiday to Wales because if this trip has taught me anything it’s that the world is just there to be explored! North Wales is a destination not be missed.

We also have trip to Innsbruck booked for later in the year and the big Disney trip to Florida early next year, Lots to look forward too and plenty of travel posts!
Gem at 21:14:00
Share